Prior to the still-ongoing Statham Renaissance spawned by his roles in Furious 7 and Spy, action superstar Jason Statham was cranking out many a low budget actioner in between installments in The Expendables franchise. Some of them were winners (Safe, Redemption), some were merely solid (Blitz, Homefront), and some were dreck (Killer Elite, Parker). The Mechanic falls into the middle category for me. 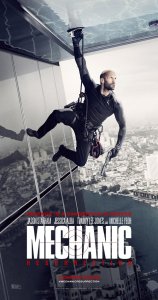 A remake of the 1972 Michael Winner film, Simon West’s 2011 actioner saw Statham taking on a role previously played by the great Charles Bronson. While not particularly remarkable, West’s redo had a decent script and supplied Statham with some very game supporting players. When you fill out your B-action reboot cast with the likes of Ben Foster, Tony Goldwyn, and Donald Sutherland, you’re doing a good job. That goes double for when you let Foster do a lot of the dramatic heavy lifting.

Unfortunately, I’m not here to talk about that film. Instead, the focus is on its follow-up, which finally arrived this year after numerous postponements and a big round of reshoots. I love Statham, but he’s generally best when he has someone capable to riff off of. Foster provided that in the first one. Sadly, there is no such counterpart here.

When not on autopilot during scenes focused solely on him, Statham’s primary scene partners are Jessica Alba and Michelle Yeoh. The latter is a very good actor, but has virtually nothing to do here beyond adding maruee value for overseas territories. It’s a somewhat ugly thing to say, but it’s the truth. It is a thankless nothing role and not even the first such part Yeoh has had this year. That’s right, I’m looking at you, Morgan.

As for Alba? I don’t really have a problem with her as an actress, but she’s no Ben Foster. Furthermore, she spends the majority of the film as a damsel in distress. This is a tried and true “hero must complete tasks for the villain to get his lover back” story. I am more than fine with a film playing with stock genre tropes, providing the tale either gives me a new take on such cliches or at least executes them with expert precision. Mechanic: Resurrection does neither.

For a film packed with small action sequences, it is shockingly dull. There’s no sense of excitement or urgency to be found within. Instead, even amidst moments of shootouts or Statham’s Arthur Bishop laying the smackdown on loads of disposable henchmen, it’s a slog. This is a 93 minute movie that feels like a bloated 120 minute snoozefest. For shame!

What makes it all the worse is that, like the first, it appears to be a decent hit on a worldwide scale. This means that a third Mechanic is probably a sure thing. I can only hope that they get their act together on the next one. Of his own franchises, only Statham’s Transporter series hit a third entry with him starring and that too was a waste of a flick. I’d hate to end up with a dud of a Mechanic 3, especially when something far more interesting like the still-unmade Crank 3 lies in developmental hell.

In the meantime, despite its success, I’d suggest skipping this wet blanket of a sequel. Did you notice that I didn’t bring up Tommy Lee Jones? Yeah, they wasted him too. This is particularly criminal, as he seemed like he would have really cut loose had they given him something to chew on. Again, for shame.