Ready Player One as a novel was a phenomenon. While I’ve yet to ever sit down with Ernest Cline’s book, there’s no denying that he made his mark with it and crafted a zeitgeist-creating page-turner. A film adaptation was inevitable and would certainly garner a hefty amount of attention, no matter who was behind the camera on it. When none other than Steven Spielberg claimed that director’s chair, all eyes instantly landed on the project, even the eyes of those who despised the book. 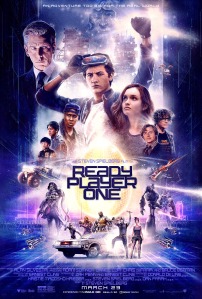 The film opened earlier this year to a largely positive response, with scores of folks in my social media feeds falling head over heels for it. I unfortunately missed out on catching it on the big screen, thus depriving myself the chance of seeing it with a large enthusiastic audience. For better or worse, this can often temper one’s response to such a film. That may well have happened here, as I came away from Ready Player One largely unimpressed by what I had seen.

I have no prior relationship with the source material or its author, so I harbor no negativity on that end. As for Spielberg himself, I remain a massive fan, even though I haven’t been overly thrilled by his more recent output. In other words, I sat down to watch it with no expectations and very little knowledge of what I was about to see. I wish I enjoyed it more.

The notion of seeing a protagonist in the classic ’80s sci-fi/fantasy mode going on a hero’s journey of self-discovery as he literally wades through someone’s ’80s nostalgia is a charming and intriguing one. Cheap tricks or not, it IS fun seeing the DeLorean from Back to the Future, the Teenage Mutant Ninja Turtles, Jack Burton’s truck from Big Trouble in Little China, some Halo soldiers, King Kong, and the T-Rex from Jurassic Park. It’s fun seeing an Alien chestburster explode through the chest of Mortal Kombat‘s Goro and our heroes navigate the Overlook Hotel from The Shining. Hell, it’s outright COOL seeing the Iron Giant go toe-to-toe with MechaGodzilla. I can see why many loved the movie for those reasons alone.

Unfortunately, I found the nonstop coolness on display to be hollow. Whether it was the constant bombardment of such elements or the uncanny valley-ness of the OASIS sequences, I was constantly checked out during the film’s runtime. The non-OASIS sequences were more engaging for me. I was more interested in the world around our heroes and villains than I was in the Wreck-It Ralph by way of Tron story being laid out before me.

That said, kudos to the cast, because none of the performances fell flat for me. Tye Sheridan hits all of the right beats as a classic Spielbergian hero and the ever-great Olivia Cooke is predictably great here. Ben Mendelsohn once again makes for a great slimeball villain and is flanked by up-and-comer badass Hannah John-Kamen as his henchwoman. Throw in a fun Willy Wonka-esque performance by Mark Rylance and a few other great performers? Now you’re cooking.

I just wish it had led to a more interesting meal. We’re given reasons as to why this dystopian world where people do little but play games all day exists, but it’s all surface level. Same goes for the film’s examination of Rylance’s Halliday and his nostalgia obsession. These things are explored by the film, but not to a depth that satisfied my curiosity. I wanted the oceans of pop culture references and an examination of why many of us, myself included, surround ourselves with such things in our adult lives. Perhaps I expected to much from it?

Ready Player One‘s nostalgia-fueled, coolness-filled adventure might not have worked for me, but there’s a good chance it will for many of you. There’s absolutely nothing wrong with that. Just because I didn’t enjoy the film, even with it’s cameo from Monster Squad‘s Wolf Man, doesn’t mean you won’t. The never-ending cavalcade of recognizable characters alone makes it worth a look, even before you toss Spielberg into the mix. Seek it out and then let me know how you felt about it! What worked for you? What didn’t? I’m curious!

P.S. – In addition to the numerous cameos from the genres icons (i.e. Freddy Krueger, Chucky, Jason Voorhees, Christine, Gremlins, etc.), horror fans should keep an eye out for one of Wade’s neighbors, who is played by Claire “Julia” Higgins of Hellraiser & Hellbound fame!