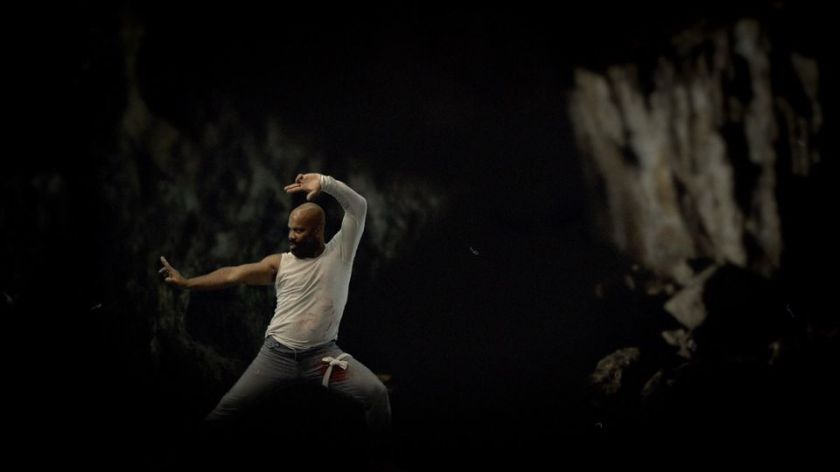 You have to admire a film title that tells you exactly what you are about to see. Papi Ramirez vs. Giant Scorpions really does say it all. Our lead, a stuntman named Papi Ramirez (Leslie Rivera), is about to have a really bad giant scorpion-filled day. Unfortunately for said scorpions, they’re about to have a bad day as well. After all, as the tagline says: “Their venom kills, but Daddy’s got karate skills!“

This is a loving, homemade homage to the atomic monster sci-fi flicks of the 1950s and a tongue-in-cheek one at that. Writer/director/producer/actor extraordinaire Leslie Rivera has a delightfully offbeat sense of humor that permeates every frame of the film, imbuing every last inch of it with his personality. Moreso than almost any other film I have seen this year, Papi Ramirez vs. Giant Scorpions feels completely handmade. There’s a good reason for that, as it actually was. Rivera actually filmed the bulk of the project by himself in a storage unit!

Normally I tend not to dwell on what went into the making of a film while I’m reviewing it, as at the end of the day the movie needs to stand on its own beyond all of that. In this case, however, it’s hard not to marvel at the passionate do-it-yourself vibe that flows through everything on screen. Is it shaggy? Yes. Is it too long? Probably. Is it goofy? Absolutely. Is it charming? For sure. But then again, my brain is hardwired to be entertained by something like this.

This is not a movie for everyone. It is full of crude effects works, it has a really wonky sense of humor, and the scorpions talk in really silly voices. You’re either down with a wholesome Afro-Latino stuntman karate-ing his way through a talking, desert cave-dwelling giant scorpion family in a ’50s monster parody or you’re not. This is the kind of film that should be destined to appear on Adult Swim at 2:00am. Something that you catch right before you fall asleep and then wander the next morning if it was real or simply an insane fever dream. If that sounds appealing to you, then I suggest that you seek Papi Ramirez vs. Giant Scorpions out. If not, then you might want to steer clear, as its niche sensibilities are certain to rub you the wrong way.

Papi Ramirez vs. Giant Scorpions is an original sci-fi/horror comedy that was written, directed, and produced by Leslie Rivera. It stars…you guessed it (no, not Frank Stallone)…Leslie Rivera!