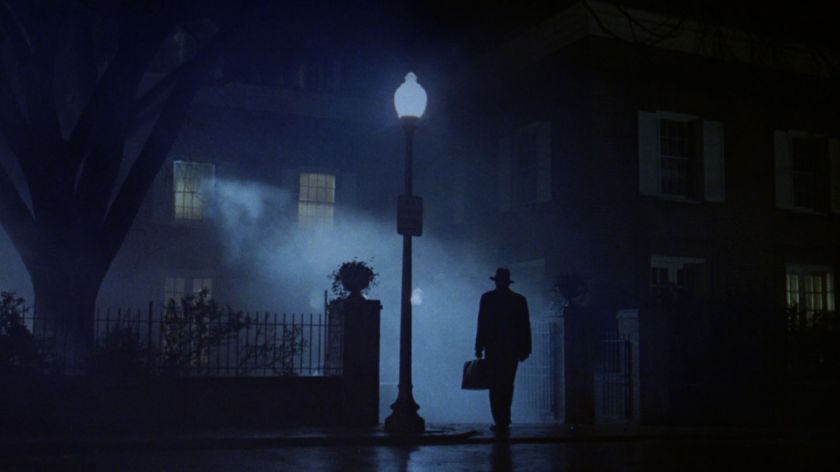 Some movie lovers can easily pick and choose what they want to consume when it comes to a film series. Not me. When I sit down to spend time with a series, as long as the first few installments interest me, I am in it for the long haul. Sometimes this results in what I like to call “cinemasochism”. Other times I end up finding a diamond in the rough. The only way to know for sure is to consume it all, tolerate the poison, and report back my findings. Now it’s time for you to sit back, relax, and let this Cineater imbibe whole franchises in order to sniff out which entries are actually worth your time. My latest subject: The Exorcist!

After almost 50 years, William Friedkin’s The Exorcist not only remains the best film in the possession subgenre, but also one of the greatest horror films of all time. It is, simply put, a masterpiece. The performances are phenomenal, the pacing is superb, the music is haunting, and the FX work is sublime. It is a fantastic piece of filmmaking. It’s not often that a great film is adapted from a great novel, but this one absolutely fits the bill.

What we have here is the tale of an innocent teenage girl (Linda Blair) who becomes possessed by the demon Pazuzu. Her desperate mother (Ellen Burstyn) attempts to help her daughter with the aid of doctors and psychiatrists, but nothing works. In fact, it seems to only serve to worsen the girl’s condition. At the end of her rope, she turns to the only avenue that appears to be left to her: the Catholic Church. Enter two Jesuit priests: veteran exorcist Father Merrin (Max Von Sydow) and the compassionate, but conflicted Father Karras (Jason Miller).

Why would a demon possess an innocent atheist 12-year-old girl? Is it to make a mockery of atheism? You don’t believe in God or Satan, but they can touch you anyway? Is it because an atheist family would be less likely to turn to religion in the wake of such an affliction, thereby allowing the demon to get an even deeper foothold within the girl? Is it merely thumbing its nose at God? Or is it simply to corrupt and destroy a symbol of purity to further corrode people’s faith in all that is good in the world.

The answer is all of the above. To Chris MacNeil, the demon is saying, “You ignore God and he might ignore you too, but I’m still paying attention. Look what your doubt has done to your daughter.” Obviously that’s coming at things from a religious angle, but one could view it in broader terms as well. Such as an illness striking an unvaccinated child because their parents didn’t think it was important to keep up with their shots. Or you simply not being diligent about keeping your phone charged before venturing out of your home and getting caught somewhere without the ability to call for assistance. Mind you I’m not labeling any sort of “religious preparedness” as something as important as vaccines. The point is that life constantly throws shit at you that you are unprepared for. And, within the confines of this tale, that unexpected event happens to be demonic possession.

The why of it all is partially explained by Father Merrin in the longer cut of the film, at least in terms of his perspective on the matter. When questioned by Karras as to “why this girl?”, Merrin replies that the point is to make us despair. To look upon the havoc being wrecked upon Regan’s body and soul and wonder why it was allowed to happen. Why we seemingly can’t do anything to stop it. Despair is the point. Cruelty is the point. Hopelessness is the point.

What I find most interesting about all of this is how Damien Karras’ approach is entirely different from everyone else who attempts to help Regan. The doctors and psychiatrists attempt to diagnose her based on the symptoms at hand. To treat each problem as it manifests. Normally this would work, but this isn’t a normal situation. You cannot treat a malevolent force like a disease.

Oddly enough, Father Merrin’s approach is quite similar. Granted, he is aware that Regan is indeed possessed and his goal is to expel the inhuman force that lies within her. But even this is still a rather cold and clinical approach. Much like the medical professionals follow their checklist of tests and diagnoses as they attempt the heal Regan, so too does Merrin. They are all slaves to ritual and that is why they fail.

But Karras? Karras is a slave to his own heart. It is a heart that loves psychiatry and the priesthood, even though his mind doubts his resolve within either profession. It is a heart that loves boxing and movies. It is a heart that aches in torment over the death of his mother, even though his mind tells him there was nothing more he could have done. Damien is such an empathetic person that he is miserable. That misery has made him feel powerless to help those around him, be they the priests that he counsels at Georgetown University or the MacNeil family as they contend with Regan’s possession.

The demon Pazuzu and Father Merrin both think that this misery makes Damien weak. Merrin might sympathize with his situation, but he no longer wants him a part of the exorcism after the first few rounds. Pazuzu thinks Karras is a joke. You can hear its judgement in every interaction it has with Damien, even though it never fully voices it.

A priest losing his faith? What a cliche! All heart and no conviction! He’s no threat! Wake me up when a real priest arrives!

Empathy is Damien’s greatest weapon. It might cause him to often wallow in sorrow and drive him to drink, but it is his true power. It is also the very power that he wields to defeat Pazuzu in the film’s finale. Spoiler alert: Merrin croaks before completing the exorcism! His heart literally gave out. Lucky for Regan, Damien has more heart than anyone.

Having empathy for people we don’t even know is one of the hardest things to accomplish as a human being. It’s generally easy to care for our friends and family; anyone that resides within our crafted bubbles. But to care for individuals or groups that live beyond our inner circles? That’s a much harder thing to do, especially these days.

What we have here is a man who ultimately gives his life to save a child that he never knew. Damien Karras never actually met Regan MacNeil. He only ever met and spoke to the demon living within her. He traded his life and soul for a complete and total stranger, which may well be the ultimate act of empathy. It’s also an act that Pazuzu didn’t see coming.

Obviously this is important for his character, but it’s important for this series as a whole. If you are a horror fan, you have probably seen multiple demonic possession and/or religious horror films. From classics like The Omen and The Sentinel to beloved modern offerings like The Last Exorcism and The Conjuring to wilder cult gems like Abby and Beyond the Door. More often than not, such films generally hinge on people accepting belief in God and/or a righteous calling to defeat the evil at hand. That’s not quite true for The Exorcist franchise however.

Sure, there are plenty examples of evil-battling believers both in this initial film and in many of the follow-ups that come later, but the ultimate battles themselves are ultimately not very traditional. Perhaps that’s what truly sets them apart from their imitators, for better or worse.

It isn’t God that saves Regan MacNeil. No deus ex machina occurs during the finale, nor does the power of prayer (or of Christ) compel the demon to finally leave her. It’s Damien’s core sense of empathy, of humanity, that saves her in the end as he trades his life for hers. At the end of the day, The Exorcist is less a tale of Heaven vs. Hell or Good vs. Evil and more just a tale of Humanity vs. Inhumanity. It’s empathy vs. cruelty. It’s selflessness vs. selfishness.

I think that, more than anything, is why this story still resonates to this day. We don’t need crosses and holy water to defeat the bad that resides within our world. Our biggest defenses against them are instead kindness, caring, and sympathy. The ability to look upon someone who is in dire need and to spring to action to make it right. You don’t need religion or psychiatric training for that. You just need a heart. A heart like Damien’s. A heart that can blindside the evils of the world and exorcise them.