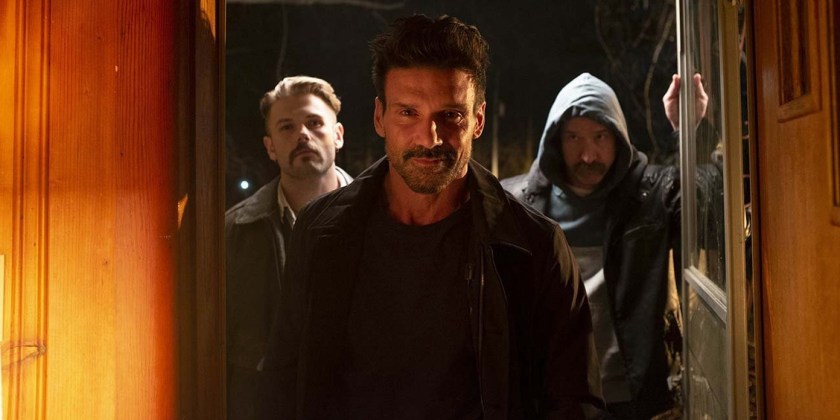 Into the Ashes tells a tale as old as time. A former criminal (Luke Grimes, “Yellowstone“) has settled down far away from his past transgressions. He has a stable job and caring friends. He has a loving marriage and a nice home. He even has begrudging support from his wife’s family. Naturally all of that is undone once his former partners-in-crime manage to track him down. What follows is a series of reprisals as he and his former associates tear one another asunder in backwater smalltown America.

Crime dramas centering around lower-class Americans are a dime a dozen and have been for a long time now. Thankfully fans of this sub-genre have two glaring markers of quality to look for in new offerings these days: Frank Grillo and James Badge Dale. Not only are these two gentlemen always great in whatever projects that they choose to appear in, but they have each had a real knack of late for appearing in quality films. The Standoff at Sparrow Creek, Hold the Dark, Little Woods, and Donnybrook have all starred one or both and all three are worth your time. So too is Into the Ashes.

What separates this one from the usual pack is that while the story does indeed go the places that you expect it to, it never quite follows the standard structure for this sub-genre. You can probably suss out in the first 20 minutes who is going to live and who isn’t. You’d be right. That said, there’s a difference between knowing awful things are going to happen to these characters and then actually watching it unfold.

This film plays with your crime tropes expectations and often opts subvert them. This is likely to tick off a chunk of viewers, but I appreciate the fact that writer/director Aaron Harvey isn’t interested in dishing out a paint-by-numbers crime thriller here. He’s messing with the form here and while I don’t think his choices are always successful, they certainly serve to make Into the Ashes stand out. Throw in the cast (which also includes “Longmire” star Robert Taylor) on top of that and you have more than enough reasons to seek it out.

As far as the disc itself goes, the presentation is top-notch. The extras are sadly light, with this release only offering up two short behind-the-scenes featurettes. While both are informative, their brief runtimes left me wanting more. It’s a shame that there’s no commentary from Harvey or any of the stars. I would have liked to have been handed a deeper look into the film.