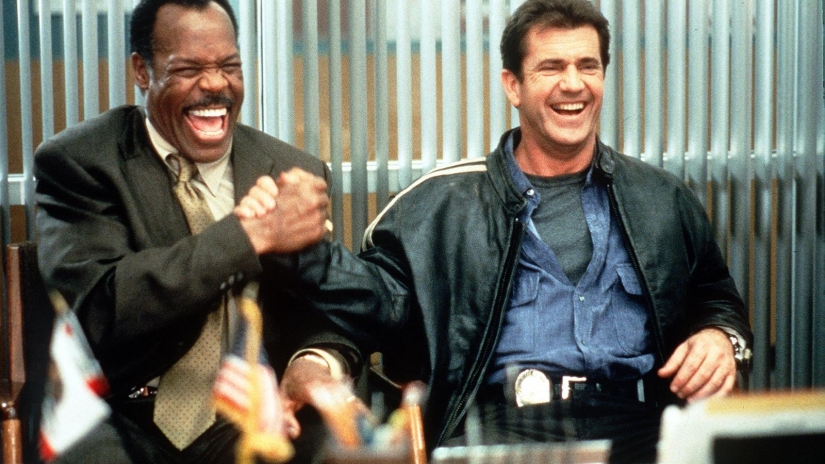 I have always had a bit of a fascination with unmade films, especially when it comes to screenplays for unproduced sequels. I have a small collection of them in my possession and have often mused about the possibility of reviewing them in an on-going column. Well, my friends, the time has come to finally pull the trigger on that venture. Given the latest rumors about a potential Lethal Weapon revival, I can think of no better starting point in a land of untold cinematic adventures than an unmade Riggs & Murtaugh romp. So, without further ado…

It was revealed way back in 2008 that original Lethal Weapon writer Shane Black had co-written a spec treatment for a fifth outing in the series. Black shared writing duties on the spec with Chuck Mondry, who also co-wrote a still-unproduced Doc Savage project with him. The copy that I have is undated, so I am assuming that it is the original treatment and not a revision.

When we last saw Riggs & Murtaugh, they were standing in a hospital maternity ward looking upon their newborn son and granddaughter (respectively). They had gone up against the Triad, taken on a villainous Jet Li, and somehow managed to survive. They were alive. They were happy. They were family.

That was then. 2011 is now. It’s been 13 years since the events of Lethal Weapon 4 and a lot has changed. Martin Riggs is still a detective with the Los Angeles police department, but his glory days are behind him. He is out of shape and has been offered a desk job promotion, but doesn’t want to take it, despite a significant raise being attached to it. Why? Because he’s afraid of admitting he might be aging out of the job. He attends weekly AA meetings and now leads a normal domestic life with his wife Lorna (Rene Russo) and his 12-year-old son Martin Jr.

The treatment goes out of its way to juxtapose Martin’s current life with that of his former partner’s in the original film. His suburban house looks similar. His “old man” attitude is also similar, as we see him chiding his son for playing violent videogames. He even gets a “family busts in on him while he’s in the bathtub” sequence. Whether he wants to admit it or not, he’s not far from retirement.

Speaking of hanging it up, Roger Murtaugh is retired and has been living the good life at his home in Toluca Lake. He misses the job, but spends his days playing poker with old cop buddies and entertaining his grandchildren. His wife Trish shows up for a couple of short bits in the treatment, but it’s little more than an extended cameo role. A 5-year-old granddaughter named Shya has a tiny supporting role, but it is unclear if she is the child of Roger’s eldest daughter Rianne or his youngest daughter Carrie.

Speaking of Carrie, Rianne, and Rianne’s cop husband Lee (Chris Rock), none of them really have a part to play in this tale. There’s a tiny sequence at the end where they have cameos at a big family dinner, but they are otherwise absent from this story. Same goes for Joe Pesci’s Leo Getz, who is only present for said closing dinner. Neither Captain Ed Murphy nor Dr. Stephanie Woods are mentioned at any point in the proceedings. For better or worse, Black and Mondry have pretty much jettisoned the series’ supporting cast of characters.

Except for Nick Murtaugh.

Roger’s son has gone on to become a sergeant in the New York Police Department’s anti-mob task force. He lives a bachelor’s life in New York City on the other side of a country, where his only roommate is Riggs’ old dog Sam. He has a new girlfriend in the form of ACLU lawyer Lisa McBain. He also has a faithful friend in cop partner Tim “Two-Buck” McTaggart. Why “Two-Buck”? Well, because he is a cheapskate and a bad tipper.

If you’re thinking that Nick manages to get himself neck-deep in serious trouble that Riggs & Murtaugh need to come to New York to bail him out of, you’re right. If you think said trouble has a connection to Riggs’ past, you’re right. If you think this is probably all set around Christmas? Well, then you just pulled off a ho-ho-hat trick of correct guesses. Congratulations!

The villains this time out are a private defense contracting company staffed with mercenaries. Having made loads of money off of the War on Terror, they have resorted to scheming up new ways of keeping steady employment as the conflicts in Afghanistan and Iraq have now begun to die down. These days they are smuggling priceless Iraqi artifacts into the U.S. and stockpiling weapons on American soil. Yikes.

How are they doing it? Well, they are in bed with the mob, serving on the side as bodyguards for NYC’s reigning Don and also carrying out hits for him when asked. If that’s not enough, they have hatched a scheme to assassinate the head of Homeland Security and blame it on a foreign power, thereby kickstarting another conflict that they can get rich off of. Basically, they’re up to a whole lot of action movie bad guy shit.

The treatment mostly eschews the more watered-down tone of the third and fourth films, instead harkening back to the harder-edged nature of the first two. This shouldn’t come as a shock, as those were the two that Black himself worked on, which also explains some of the plot’s mirror elements to those films. Shane & Chuck don’t ignore the events or characters of 3 & 4, but they have little bearing on the tale at hand.

That is not to say that it is lacking a funny bone. Black’s trademark dark humor is ever-present in both the plot and various chunks of dialogue that fill the treatment. At one point, Riggs uses the carrot nose from a snowman to slit a mercenary’s throat and then jabs it into his eye socket, following it up with the quip “Good for your eyesight!”. They definitely know their audience.

That’s not the only Christmas-related gag present in the writing. It has always been a running gag with fans that Shane Black is obsessed with Christmas. The holiday rears its head in some fashion in at least seven produced screenplays that the man has written and at least one other unproduced one. Never has it been more present than it is here, however. The opening sequence sees the aforementioned Don Manzetti serving community service time as Santa at a children’s hospital, with Black suggesting that a Velvet Revolver cover of “Jingle Bell Rock” score the scene*. There’s even a subplot involving a NYC crook nicknamed “The Grinch” who steals peoples Christmas presents and decorations. The characters themselves also make plenty of cracks about the holiday throughout.

Christmas kookiness aside, there’s a strong mean streak at play in the material. Even beyond a lot of overly gruesome deaths, Nick’s girlfriend Lisa is unceremoniously killed off in the finale, and there’s a random subplot involving Riggs’ old dog Sam being sick and needing to be put down. There’s also mention of Riggs & Lorna being in dire straights financially that doesn’t make much sense, as there’s no reason given as to why that would be the case. I can only assume that this would have been expanded upon in a future rewrite.

The new characters are too thinly drawn in this treatment to get a real handle on how they might have fared in a full script. Adult Nick Murtaugh is basically “Generic Cop #1” here, with his partner McTaggart fairing no better. Conceptually one can imagine the studio considering a spin-off involving both, assuming the right actors are signed up, but on paper they are pretty dull.

Lisa McBain gets to have a bit of a personality, but is not a very interesting character as written. She’s mostly just around to spout of exposition and be saved. As for the villains, they are little more than one-dimensional riffs on the original’s Peter McCallister and Mr. Joshua. The right casting could have made them work, but as is they are cyphers.

Taken as just a (dense) 59-page script treatment, Lethal Weapon 5: Body Count is a relatively breezy, pulpy read. I do wonder how people would have reacted to it had it been made at the time. There are a lot of narrative callbacks to the original 1987 film here. Too many, to be honest. It’s the kind of legacy sequel attitude that is sometimes rewarded by audiences these days (i.e. Star Wars: The Force Awakens, Halloween ’18, etc.), especially when it comes to long dormant properties. I’m not sure it would have been embraced that way circa 2011 or so, especially in the lighter, more grandiose days of Fast Five, The Expendables, and Mission: Impossible – Ghost Protocol. Ironically, it might actually do well now in a post-John Wick world where something similar like Bad Boys for Life can arrive and be a hit, but Gibson and Glover are now likely too old to pull it off as written. Even if they aren’t their characters are canonically now 71 and 83 (respectively), pushing them well beyond the realm of possibility of anything more than long since retired policemen.

As is, I can’t picture Body Count turning out to be a much better Riggs & Murtaugh adventure than Lethal Weapon 3 or 4. Black & Mondry are able to bring the harder edge of the first two movies back into play, but it’s missing most of the series’ heart. While things got too goofy at times in the last two, I think stripping back the presence of both Roger’s family and Lorna as much as this does was a mistake. Because of that, I’m honestly fine with the fact that this treatment remains unproduced. Would I watch it if it magically got made now? Certainly, but it would probably feel more like a random epilogue than a fitting ending for these characters.

* – Sorry Shane, but even if this HAD gotten made at the time, that wish wouldn’t have come true. By 2008, Velvet Revolver pretty much ceased to exist. I’m sure Scott Weiland would have happily recorded a solo version of “Jingle Bell Rock” for you, however, but why not opt for Ice-T’s Body Count instead, given your story’s subtitle?