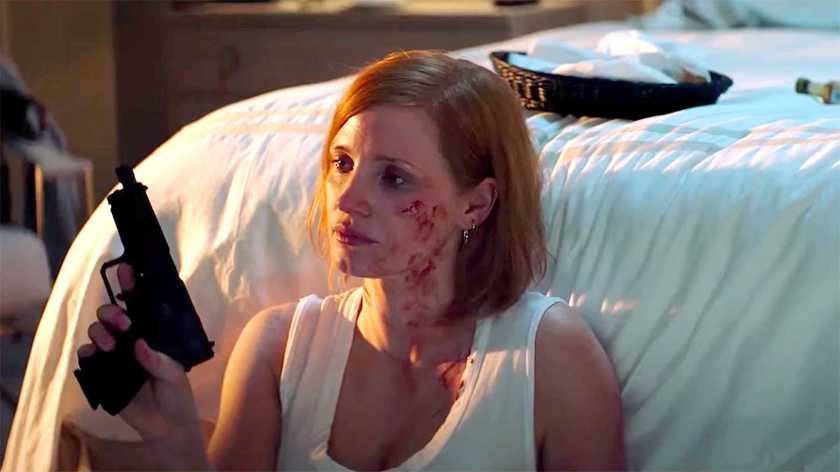 We all know this story. A cold and calculating badass woman with a traumatic past must find a way to heal her psyche will also taking on gun-toting villains. We’ve seen it dozens of times and often with Luc Besson on board as a producer. While the French genre filmmaker’s name does not adorn Ava‘s credits, this film would fit into his producing oeuvre like a perfect glove.

Our lone wolf assassin this time around is Ava Faulkner (Jessica Chastain). A former alcoholic/drug addict turned soldier turned hitwoman, Ava is one of the best in her business…because of course she is. Ava is a veteran assassin with a moral code that runs counter to her contract-providing overlords’ business practices, so this ultimately gets her in hot water with the higher ups, leading her to become a target by her own people. Because of course it does.

Let’s run down the checklist, shall we? There’s the agency handler who also happens to be a fatherly mentor (John Malkovich). There’s the heartless and arrogant top guy who wants Ava taken out because she is a liability (Colin Farrell). There’s the former lover who still very much cares about her (Common). We also get a few more supporting characters to help fill out Ava’s tragic family backstory as well (Geena Davis and Teeth‘s Jess Weixler). I could spoil how everything plays out, but if you have any familiarity at all with films like La Femme Nikita, Colombiana, Point of No Return, etc., then I think you already know those plot beats. It deviates from none of them. That’s the bad news.

The good news is that everyone is actually engaged with the material here. Farrell is appropriately smug and menacing as the lead bad guy. Malkovich is warm and protective. Common, who is shockingly not working his action chops here, gives a solid turn as her ex-fiancee Michael, who is now engaged to Ava’s sister (Weixler). As for Geena Davis? She plays Ava’s catty and judgmental mother, which is a fun touch and she’s a nice bit of stunt casting given her own badass female assassin history in Renny Harlin’s sublime The Long Kiss Goodnight.

It was also nice to see Joan Chen pop up here as the owner of a gambling den that Common’s Michael is in debt to. While Chen has never stopped acting, American audiences are probably most familiar with her work from the ’80s and ’90s in David Lynch’s “Twin Peaks“, Bernardo Bertolucci’s The Last Emperor, and Oliver Stone’s Heaven & Earth. Genre cinema fans will, of course, remember her from The Blood of Heroes, The Hunted, and On Deadly Ground. All of which are better than what is on display here. Chen’s presence injects a bit more oddness into the mix, as Chen has never been afraid of being quirky with her performances. Unfortunately, she’s not in it nearly enough to fully spice things up.

Director Tate Taylor (The Help, Ma) is able to get some nice performances from this cast, which helps round out the characters a bit more than usual, but it’s just not enough to make the film stand out. The plot is just too stale and the action sequences too pedestrian to make Ava rise above other recent forgettable examples in this genre (i.e. The Rhythm Section, Anna, Peppermint), let alone to have it match an actual classic like the aforementioned La Femme Nikita. The only things that I can really give it credit for (beyond some decent performances) are the facts that it mercifully leaves out training flashbacks and that a couple of the hand-to-hand combat scenes have nice emotional throughlines due to the characters’ relationships being fleshed out beforehand.

There’s just not much here to recommend. Ava isn’t a bad movie, but it is a forgettable one. It’s the kind of film best suited for an afternoon cable watch or a late night stream. Someday somebody will manage to craft another stellar film in this subgenre, but Ava‘s not it.